A detailed look at what exactly is the government’s Project Gigabit scheme and how to make the most of the gigabit vouchers. 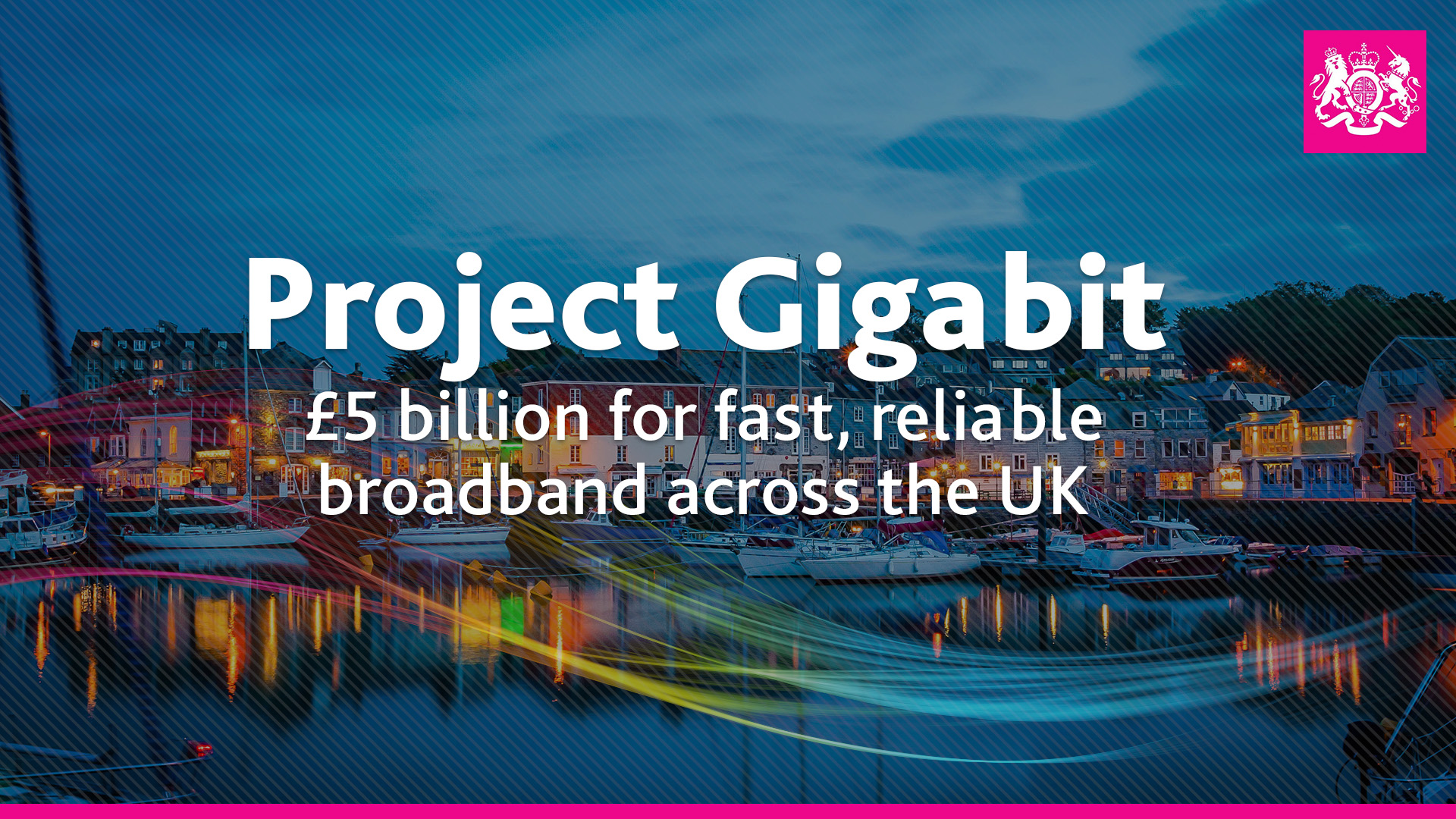 Today, a fifth of the UK population – over 12 million people – live in areas classified as rural. A government incentive set up in 2018 seeks to help these communities – also called the ‘final 20 percent’ – to get the broadband speeds they deserve by issuing them with ‘gigabit vouchers’.

The Rural Gigabit Connectivity (RGC) programme was launched in May 2019 as part of the larger Gigabit Broadband Voucher Scheme. Ultimately it aims to bring gigabit-capable, ‘full-fibre’ broadband to every home and business across the country by 2025.

However, to date, a total of 66,000 vouchers have been issued through the RGC programme, mainly across Somerset and Cumbria. This means a large sum of the funding remains untapped.

As the latest round of the scheme is set to finish at the end of June 2021, the Government is encouraging residents and businesses in rural towns and villages to “take advantage of the more than £210 million on offer and get out of the digital slow lane.”

In this blog, we answer any questions you might have about getting onto this scheme and receiving the broadband speeds you’re entitled to.

What is gigabit broadband?

Gigabit broadband is an internet connection capable of reaching download speeds of 1Gbps. Currently the fastest, most reliable connection, it is also known as Ultrafast speed.

In practice, this means multiple devices running demanding services such as HD streaming, video conferencing, gaming, virtual reality experiences and smart home gadgets at the same time, quickly and without any disruptions.

Why do I need gigabit internet?

More and more people use the internet every day. As technology gets more complex and intelligent, we need a reliable digital infrastructure to support it. Countries like Japan and South Korea already run on full-fibre networks and soon enough, it will be a necessity, not a luxury, for all of us.

Full-fibre-to-the-premise (FTTP) broadband is the most reliable way to start building this future today. Fibre-optic cables run directly to consumers’ homes and businesses, and once installed, these lines won’t be affected by the weather and won’t need to be dug up for the next hundred years.

The benefits of gigabit broadband are huge and often expressed in large economic figures – “it would potentially boost UK productivity by £60 billion.”

So, what does this actually mean?

It means 400,000 more people could work from home effectively, including in rural communities. Bridging the digital divide would allow people to move away from urban areas and still work remotely – as already witnessed by the ‘Covid exodus’ –, unlock new job opportunities, transform public services and even have a positive impact on the environment through reduced commuting times.

What is a gigabit voucher?

The UK Government is issuing ‘gigabit vouchers’ under the Rural Gigabit Connectivity programme to help rural parts of the country catch up with urban areas and bridge the digital divide.

Gigabit vouchers go towards covering the costs of installing gigabit-capable broadband to rural homes and businesses when part of a group scheme. This means consumers don’t have to pay for installation and will be helping their Internet Service Provider (ISP) with the costs of bringing the network to them.

This is important, because building and bringing a network to rural communities is usually a complicated, expensive and slow process.

How does the Rural Gigabit Broadband Voucher Scheme actually work?

Rural premises with broadband speeds of less than 100Mbps can use vouchers worth £1,500 per home and up to £3,500 for each small to medium-sized business to support the cost of installing new gigabit-capable connections.

Eligible consumers and businesses can sign up for a gigabit-capable connection through a registered supplier operating in their area. The supplier will request the gigabit voucher from the Government and get started on delivering the broadband connection.

Once the connection is established, the supplier will notify the Government, which, in turn, will check with the user that the service is live and working. Once all checks are completed, the Government pays the supplier in accordance with the Scheme.

When and where will Project Gigabit be rolled out?

The scheme will take a phased approach to connecting rural and remote areas of the UK. It’s important to note that the Project Gigabit rollout plan is for a proportion of properties in each area, not every property.

The first phase will see over a million home and business owners have full fibre broadband made available to their property. Nearly half of these properties will see installations in the area start in the first half of 2022, and the rest will follow shortly afterwards.

Here are the locations currently set to benefit from Phase One of Project Gigabit:

And in June, installations are expected to be announced for properties in:

According to its delivery plan, the government intends to conduct a market review in the next three months to start preparing for the next phase of Project Gigabit’s rollout.

While it hasn’t officially confirmed the regions for Phase Two, it outlined a number of areas that it intends to include. Once again, bear in mind that these will be for select locations within these regions:

The locations in the final phases of Project Gigabit will already have a substantial presence of gigabit broadband in the area.

While not every property will have access to these speeds, providers are well underway with their own network expansions in these areas, so government intervention could actually do more harm than good to their progress so far.

Having a sudden influx of public funding could potentially disrupt the commercial investment already made in these areas.

As a result, specific parts of the following locations are still included in the plan, but they will be addressed last in order to allow providers’ nearby commercial operations to take place first:

From June, Project Gigabit will send out quarterly updates on its progress and plans for future phases.

Applying for a gigabit voucher: A step-by-step guide

Rural is defined differently across the UK – check your eligibility here if you’re in England & Wales, here for Northern Ireland and here for Scotland.

Group scheme refers to two or more residents and/or SMEs joining up to combine their vouchers towards the shared cost of installation. Single connections are not eligible for funding under the programme, so you’ll need to team up with neighbours or raise awareness of this within your community.

If you’re applying as a business, you will be further required to:

Visit the Department for Digital, Culture, Media & Sport website and scroll down to the Postcode Checker. A quick search for your postcode will indicate whether your area is eligible for the Scheme and the active suppliers nearest to you. Select the supplier of your choice from the list labelled “Active in this area.”

Once you’ve found the supplier of your choice, get in touch with them via email or phone, referencing the Rural Gigabit Connectivity programme. They will be able to fully confirm the eligibility of your premises and advise on next steps.

At this point, it’s on the supplier to apply for the voucher and deliver the connection. The Government may reach out to you at various points of the programme for feedback on the progress.

The goal: The fastest possible broadband connection to your homes and businesses

It is highly encouraged that all eligible residents and businesses take advantage of the offer to get faster, more reliable broadband connections – but there is an important detail to keep in mind.

Although the programme aims to establish “Rural Gigabit Connectivity”, a full-fibre, 1Gbps connection may not always be viable. However, suppliers will always try to get you on the fastest speeds possible and are accountable to the Government under the Scheme.

The DCMS website states “New connections should double your current speed but must be at least 30Mbps” – this means Superfast speeds, so better, more reliable internet connection is always on the cards!

The Rural Gigabit Connectivity programme is open until the end of June 2021. To get started, visit www.gigabitvoucher.culture.gov.uk