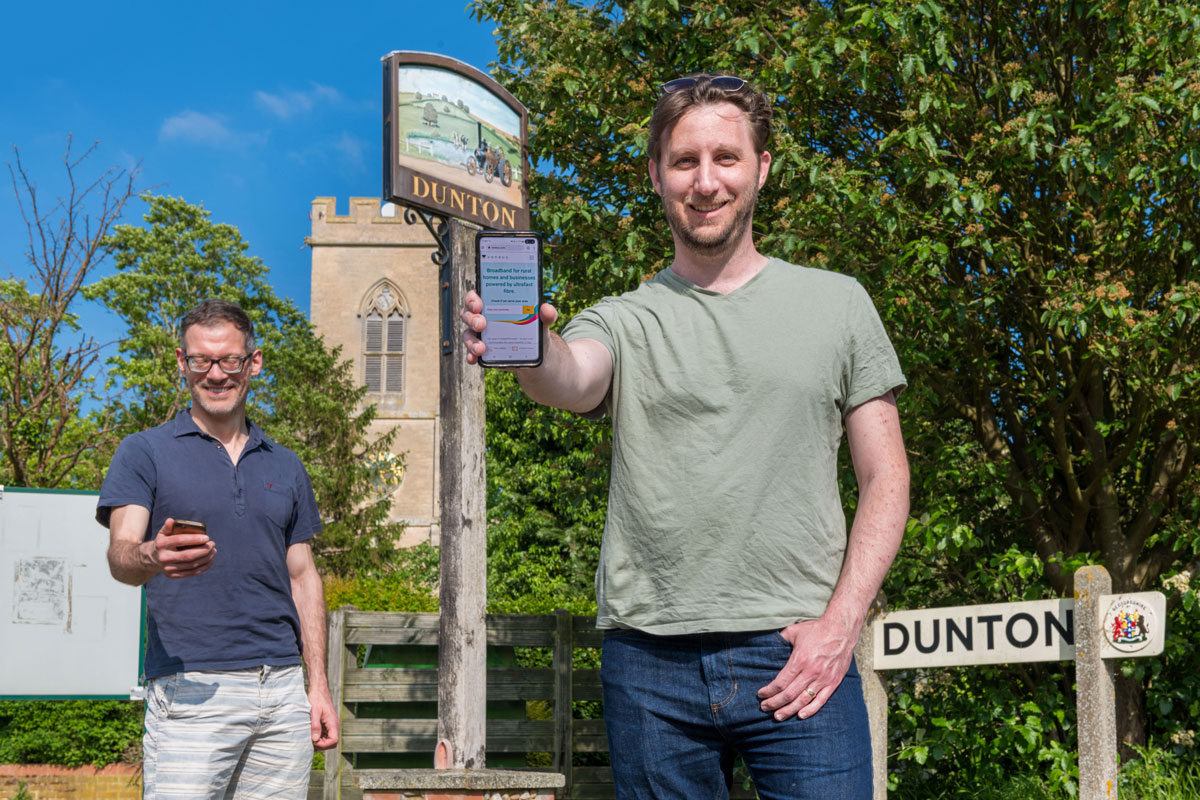 The rollout of a new Fibre-to-the-Premises (FTTP) connection to a rural Bedfordshire village marks the end of a six-year campaign to bring fibre broadband into the community.

One of the UK’s largest rural broadband specialists, Voneus, have begun rolling it out after originally arriving in Dunton in 2017 with an interim wireless solution, which immediately increased broadband speeds from less than 1Mbps to up to 30Mbps.

And the benefits were immediately noticed throughout households and businesses in the area.

Some workers in the village avoided being furloughed, as their ability to operate from home was not impacted by slow broadband connections, while Dunton’s gamers also enjoyed the significant boost to upload speeds which allowed them to return to the world of online gaming.

Dunton resident and software engineer, David Booth, required a strong broadband connection to allow for the many 3D housing designs used in his job to be uploaded and transferred online.

Having previously been with BT, David struggled to download email attachments or upload any of the huge data files needed for his job, let alone host video conferences when working from home under his old internet connection.

Thankfully, he was spared furloughing thanks in part to Voneus’s wireless solution, which was installed at the top of Dunton’s church.

David said: “When I moved to Dunton eight years ago, I knew the broadband would be slower, however, BT told us an upgrade would be coming within six months, but that never happened. Since Voneus arrived, my wife and I have been able to continue our work in digital data-heavy fields from home and avoid the process of furloughing. As an avid gamer myself, the installation also meant I no longer had to spend hours packing the PC up to take to a friend’s place just to download the latest titles. I am so grateful to Voneus for actually delivering solutions and not just leaving myself and the village in the cold like other providers have in the past.”

Since 2015, a group of residents banded together under the name of the Dunton Residents Broadband Action Group to bring better internet to the 700 villagers.

Alongside David, Tim Fowler was another of the residents leading the search for a better provider and having lived in the community for more than 11 years, he has seen first-hand how big of a leap Dunton has taken thanks to Voneus.

He said: “Even after getting an MP involved, we were told it was not commercially viable for our area to receive an infrastructure upgrade. With this fibre rollout, where the entry level package provides speeds of 100Mbps, everything is going to take another massive step forward. Our measure before was how long does it take to download a film or how long can we watch Netflix before it needs to buffer for a long period; with this installation, those worries have been completely erased.”

Independent Central Bedfordshire Councillor Adam Zerny said: “Voneus was prepared to step in and do the hard work when BT were lagging behind. The improved speeds should hopefully make a real difference to Dunton residents."

Voneus founder Matt Appleton said: “The installation in Dunton is exciting, not only for us as it is the first connection of ours in Bedfordshire to go live, but also for the village as it means they can look forward with a future-proofed broadband infrastructure. Our aim is to take rural communities that have been left behind on a path from poor broadband to gigabit-capable connectivity, similar to those enjoyed in urban areas.”

Voneus will be looking to connect a further 6,000 homes by the summer of 2023 as part of ‘phase two’ of their Dunton plan.